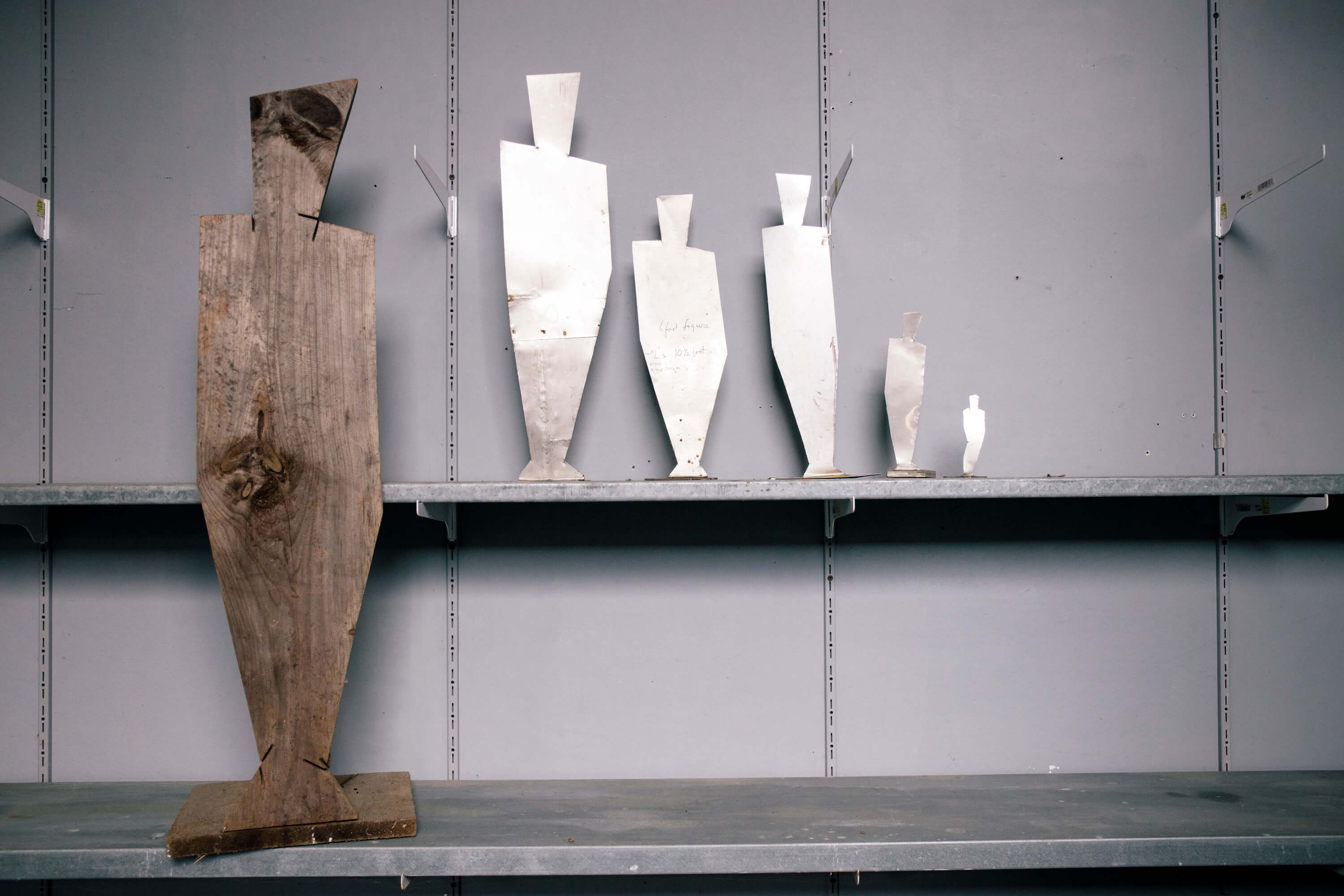 In his efforts to make movement evident, Rickey made use of a standard vocabulary of shapes, lines, planes, triangles, rectangles, and rotors. These unobtrusive forms could be easily adjusted in size and posture to explore the differences in the natural forces that make his sculpture move. 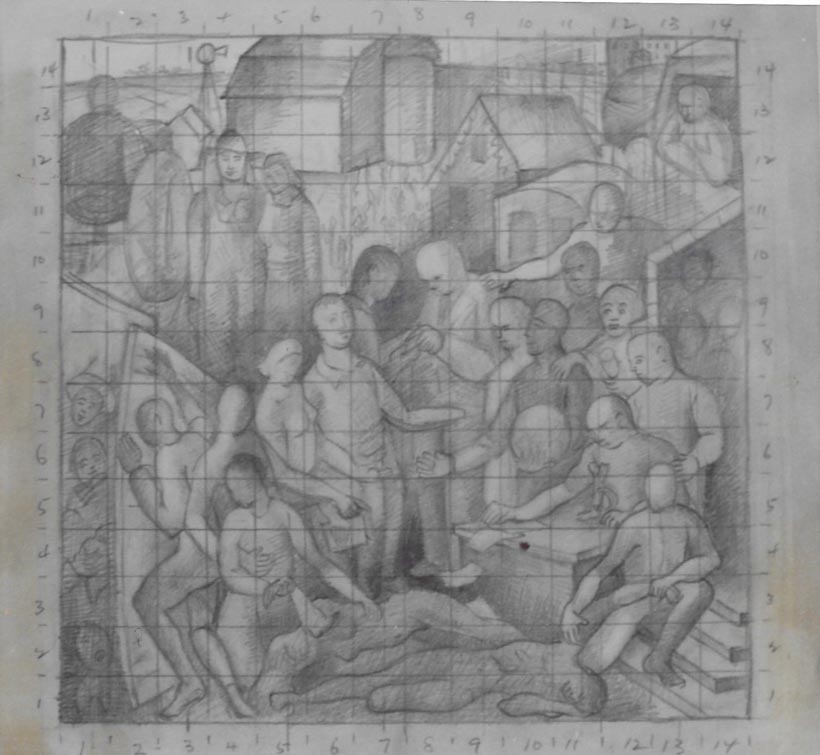 Sketch on grid for Study for “Those Who Transmit and Those Who Reach for American Cultural Traditions,” Knox College (1941, Pencil on paper, 8.5” x 11”). George Rickey Foundation.

The ability to adjust the scale of his art was something that Rickey learned as a mural artist. His murals began as small, gridded sketches which he then drew onto corresponding squares of a larger grid. By using this method, Rickey was able to transfer a small drawing onto a wall and accurately make the necessary adjustments in scale. [See Study for Mural, Olivet College (1937)] 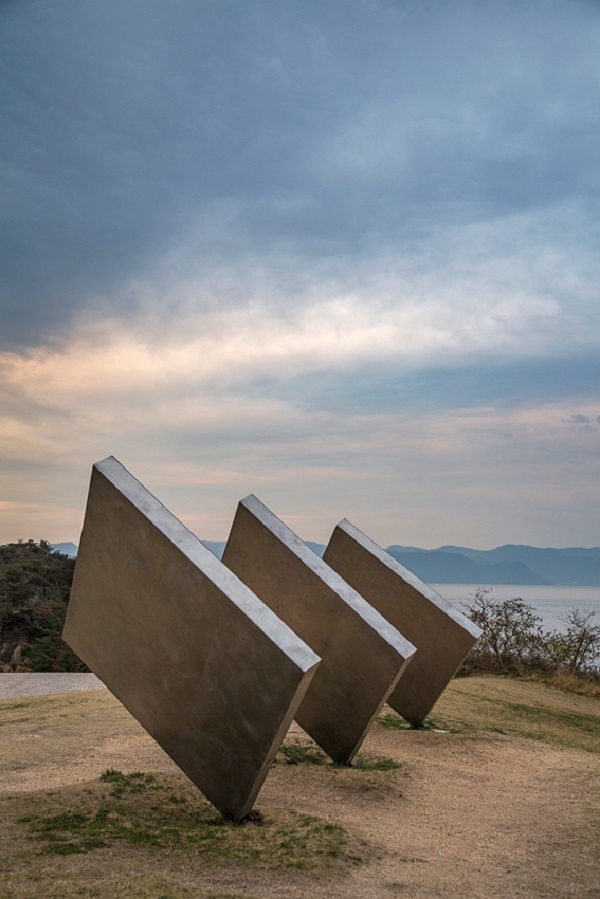 As a sculptor, Rickey often worked in a similar way, by starting small. For example, he began by creating lines that were 14” long and then studying the way in which they moved. Excited by the possibilities he saw, Rickey made them larger, which, in turn, forced him to adjust his technology to ensure that they would function just as their smaller counterparts did. The small intimate works captured breezes that might otherwise go unnoticed, and the large sculptures, in forms that appeared to be solid and immoveable, amplified the power of nature. [See Three Squares Vertical Diagonal (1978).] 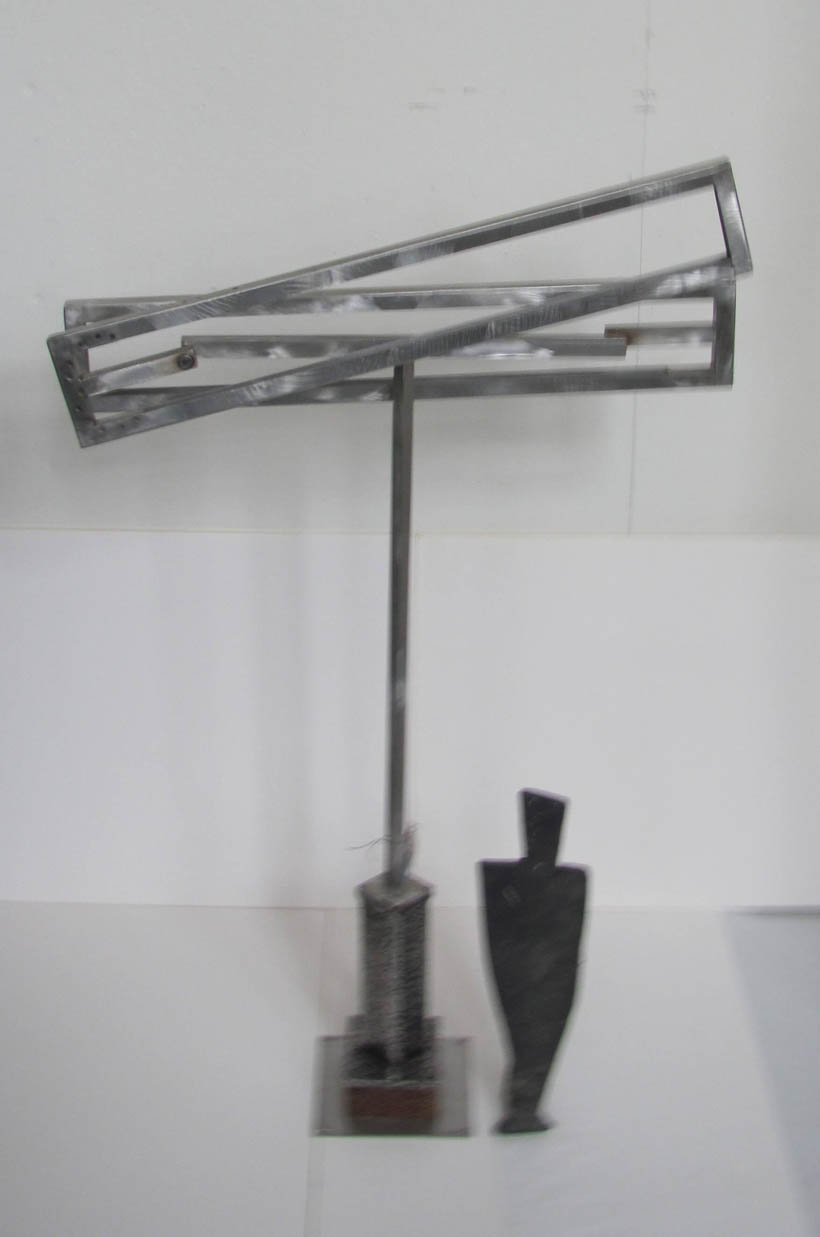 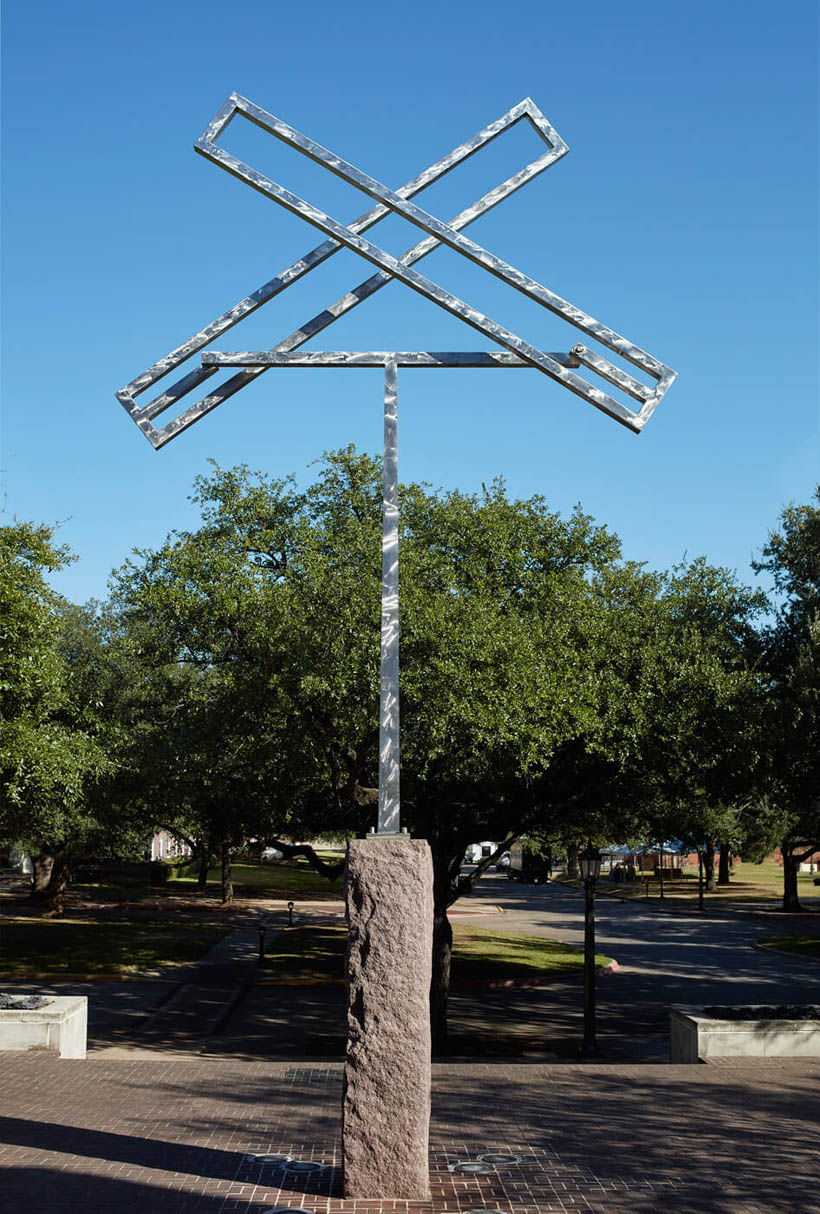 For large public commissions, Rickey would often first create a series of small-scale models, or maquettes, of an idea. To illustrate the ultimate size of a work both for himself and his clients, Rickey would place a cut-out figure made to scale next to the maquette. This also helped him begin to determine how a sculpture should move to avoid too direct of an interaction with viewers [See Maquette for Two Open Rectangles Horizontal Dallas(1983, 31” height) and Two Open Rectangles Horizontal Dallas (1984, 15’4” height)]. In some instances he went beyond this basic illustration of scale by placing the maquettes into models of the proposed location to test how the sculpture would look in situ [See Rotterdam Fountain Model, c.1969], and to assist him in identifying problems of manufacturing and installation. 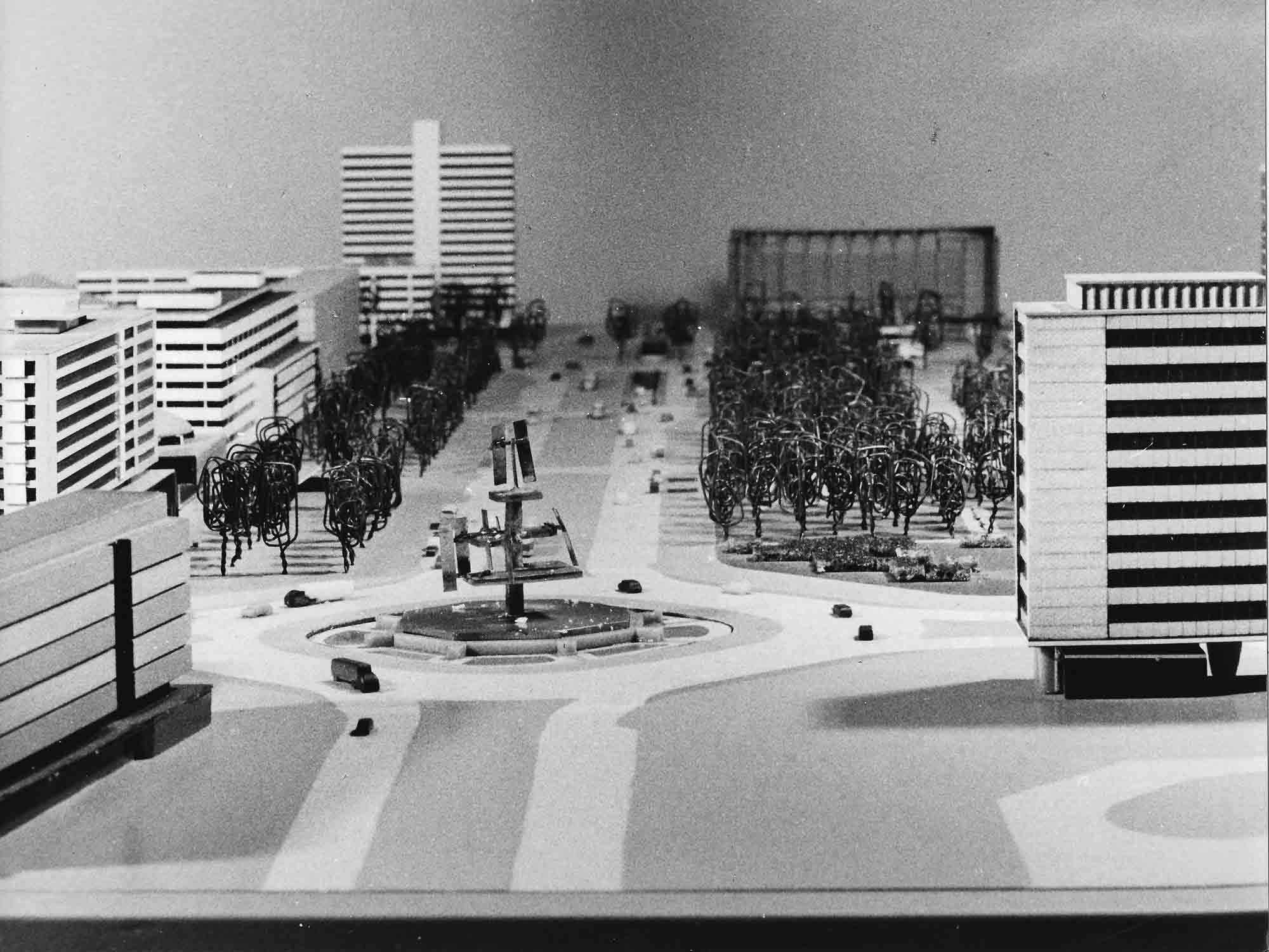 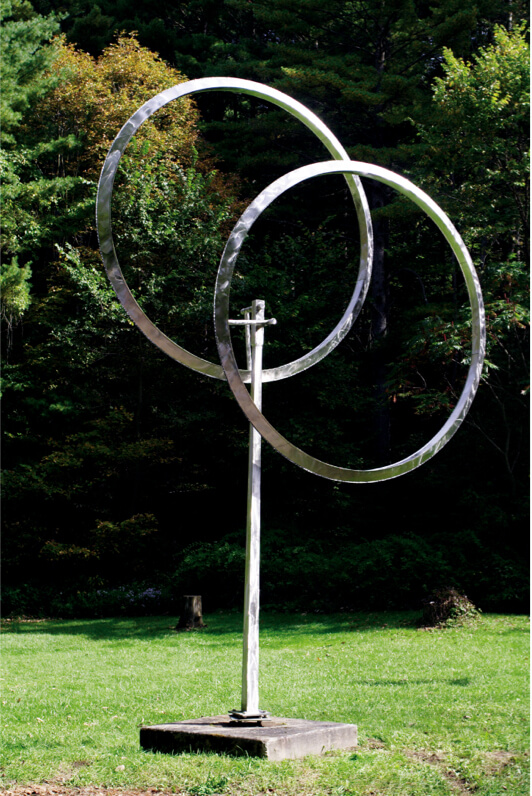 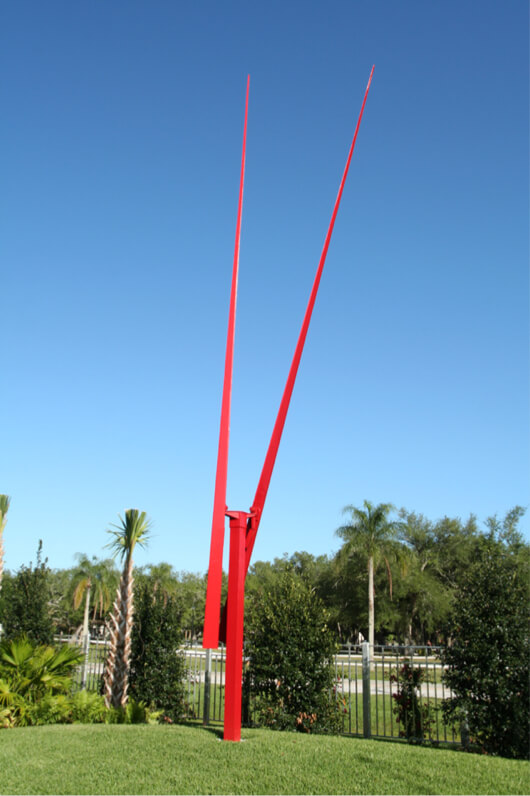 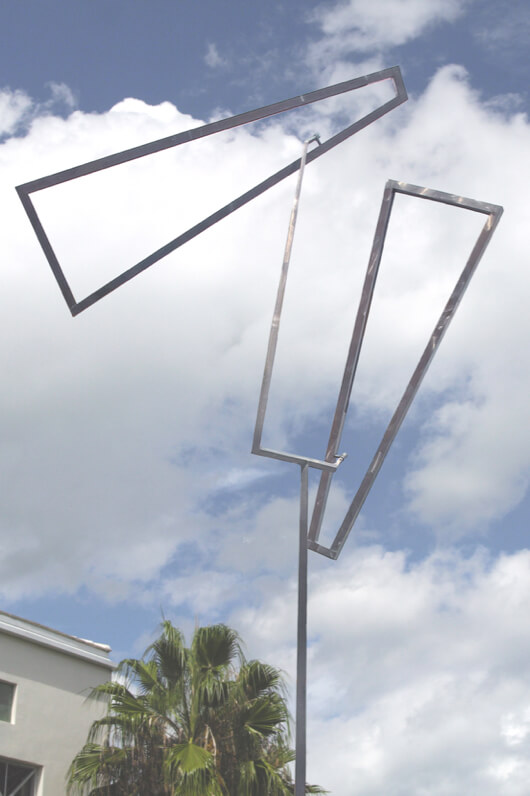 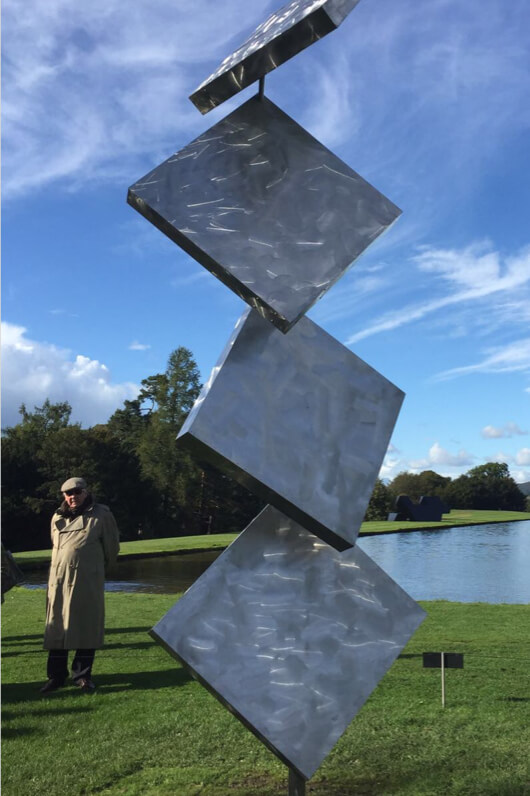