The map below guides you on a tour of Rickey’s sculptures shown at Naumkeag in 2022, highlighting seven outdoor pieces and one inside the house.
See Rickey Map

Naumkeag is the ideal venue for Rickey’s outdoor sculptures, designed to interact with their natural and built environments. This historic house and gardens were the former summer estate of the Choate family, who had a long standing commitment to arts and culture. Their home was built by leading American architectural firm, McKim, Mead & White, and set among inventive “garden rooms” by renowned American Modernist landscape architect, Fletcher Steele.

George Rickey (1907-2002) was an American artist, best known for his large-scale, geometric, kinetic sculptures. Many of his artworks were designed to be seen outside, made of stainless steel that reflects its changing surroundings, and naturally powered by air currents. His work is represented in many leading museum collections worldwide and nearby Naumkeag, including at the Museum of Modern Art, New York; Museum of Fine Arts, Boston; deCordova Sculpture Park and Museum, Lincoln, MA; and Williams College Museum of Art, Williamstown, MA.

Rickey was born in South Bend, IN, but lived and worked much of his life just 30 miles away from Stockbridge, MA, in East Chatham, NY. His father was a mechanical engineer and his grandfather was a clockmaker, and they both encouraged his interest in engineering and design. Rickey studied painting and drawing in Oxford, Paris, and Chicago, then became an art teacher and an artist. In the 1950s, Rickey developed his signature approach to kinetic sculpture.

Kinetic sculpture is three-dimensional art that moves; the movement can be generated by machines, people, or—as with Rickey’s works—nature. Rickey was one of two famous 20th-century artists known for kinetic sculpture, the other being Alexander Calder. Taking Calder’s mobiles as his starting point, Rickey combined his artistic and engineering skills to create complex types of movement, utilizing harmonic and gyratory motion to expand the dynamic potential of kinetic art.

Rickey said that “motion, which we are all sensitive to, which we are all capable of observing without having to be taught, is a sensation that appeals to the senses just as color does. It has an equivalent of the spectrum, different kinds of types of motion. I think that one can, to a very considerable extent, isolate motion as a visual component and design with that." 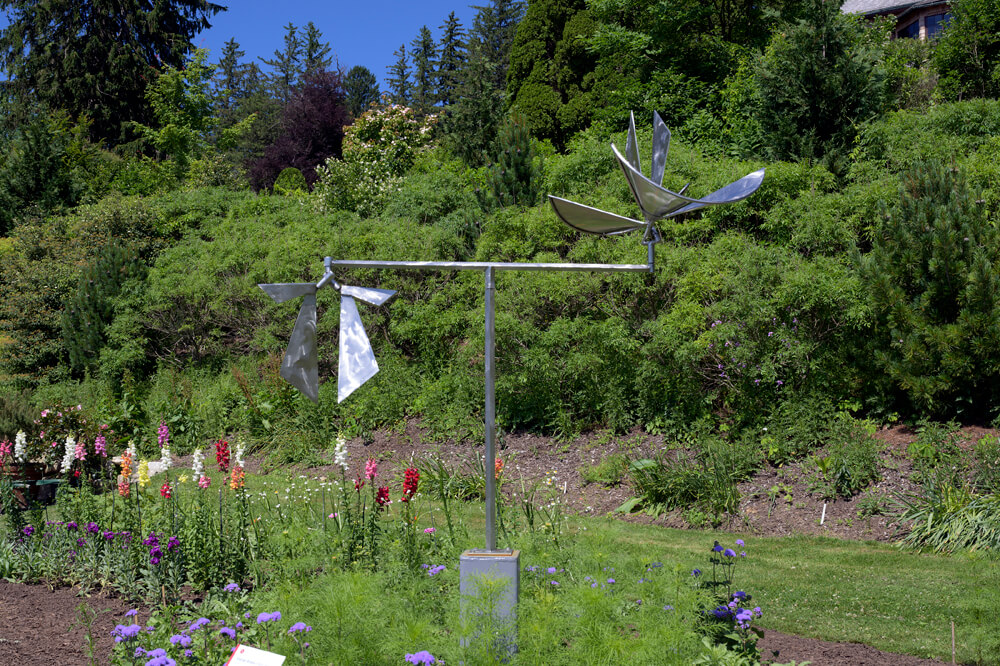 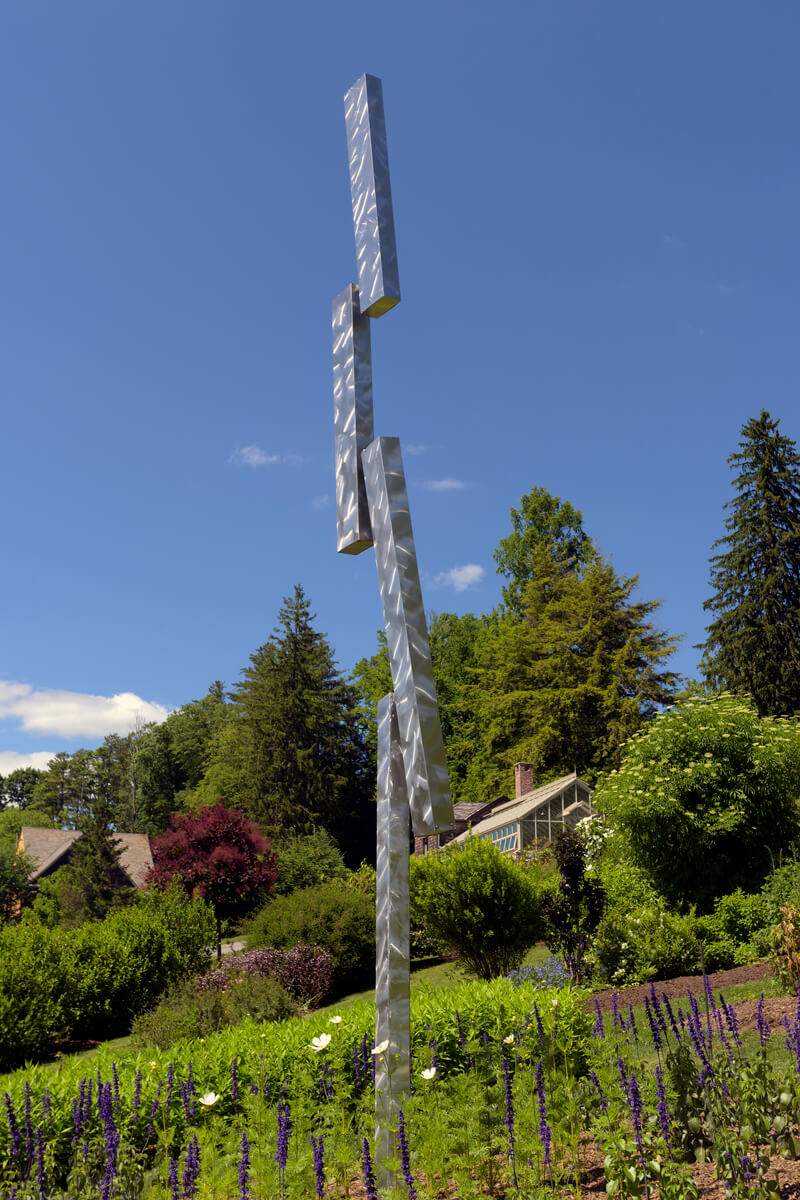 This piece is an ideal introduction to Rickey’s work, as it illustrates how his kinetic sculptures may look elementary, but are actually quite complex.

As described in the title, Rickey combined engineering and aesthetics to create his eye-catching moving sculptures from what he called “ordinary shapes.” This piece continually folds and unfolds as it morphs from a square-in-progress to complete three-dimensional square. As it moves, the square sometimes acts as a frame for the surrounding landscape. The constant motion even can be considered a metaphor for nature, with its cycles of birth, death, and renewal. 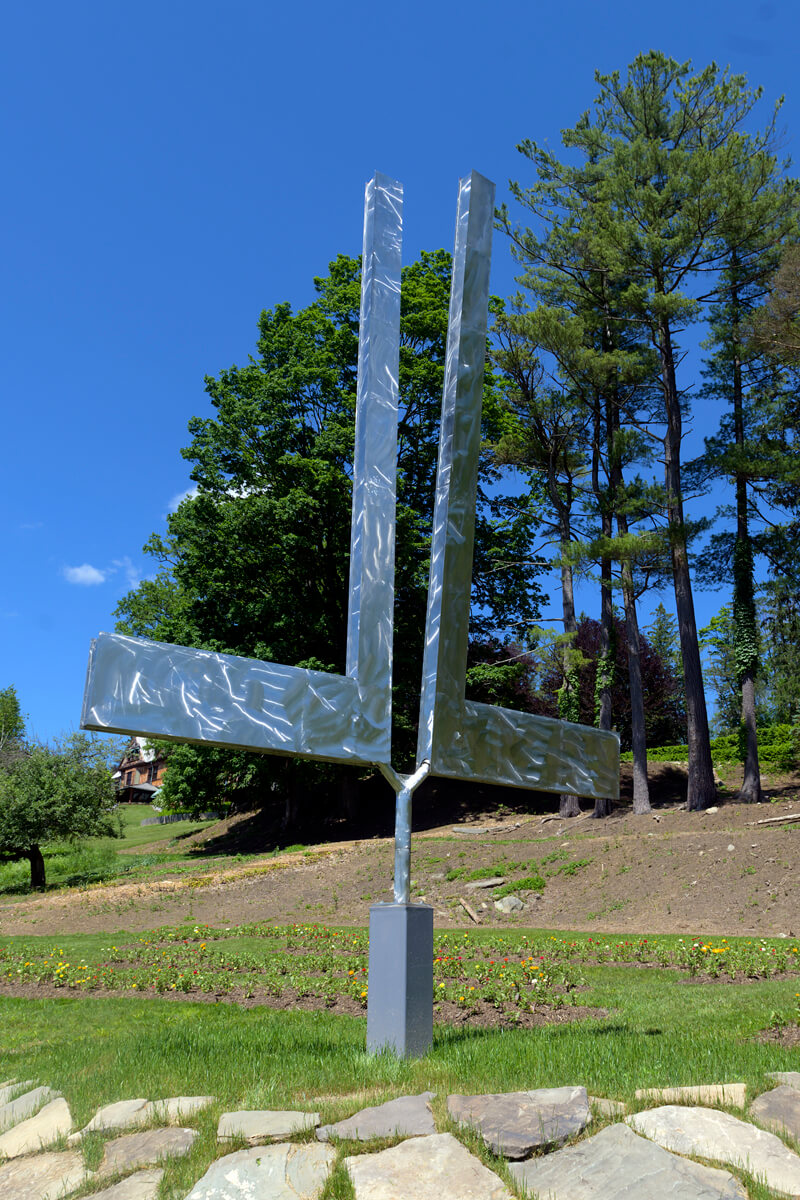 Rickey said his artworks were about “movement itself,” exemplified by this dynamic piece.

Rickey described many of his pieces as “excentric,” meaning their elements are on a pivoting shaft set at 45 degrees so they move in a conical arc, and “gyratory,” meaning their elements revolve 360 degrees around their central post in a circular movement. In addition to both motions, the elements are Ls, so they have vertical and horizontal planes that add to animated visual effect. Notice how Rickey purposefully uses shape, space, speed, and scale.

As the camera angle in the video moves, observe how the L’s appear to change size; how does the sculpture impact your perspective of its surrounding natural setting? 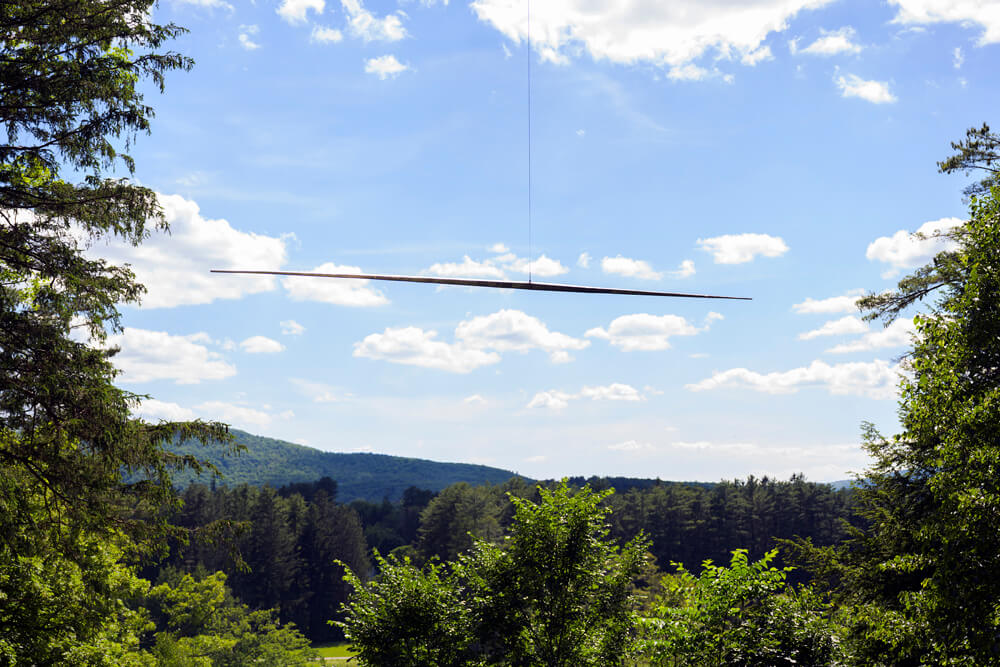 This sculpture was first shown at Naumkeag the year it was made, and the single line format is typical of Rickey’s early signature work.

The floating horizontal line, which Rickey also called a “blade,” is deceptively sophisticated. The precise balance and swing required intricate engineering solutions. Rickey chose to use long blades because “the lines permit the most economical manifestation of movement… a kinetic line drawing in space.”

Watch the line move for a while; what descriptive words come to mind? 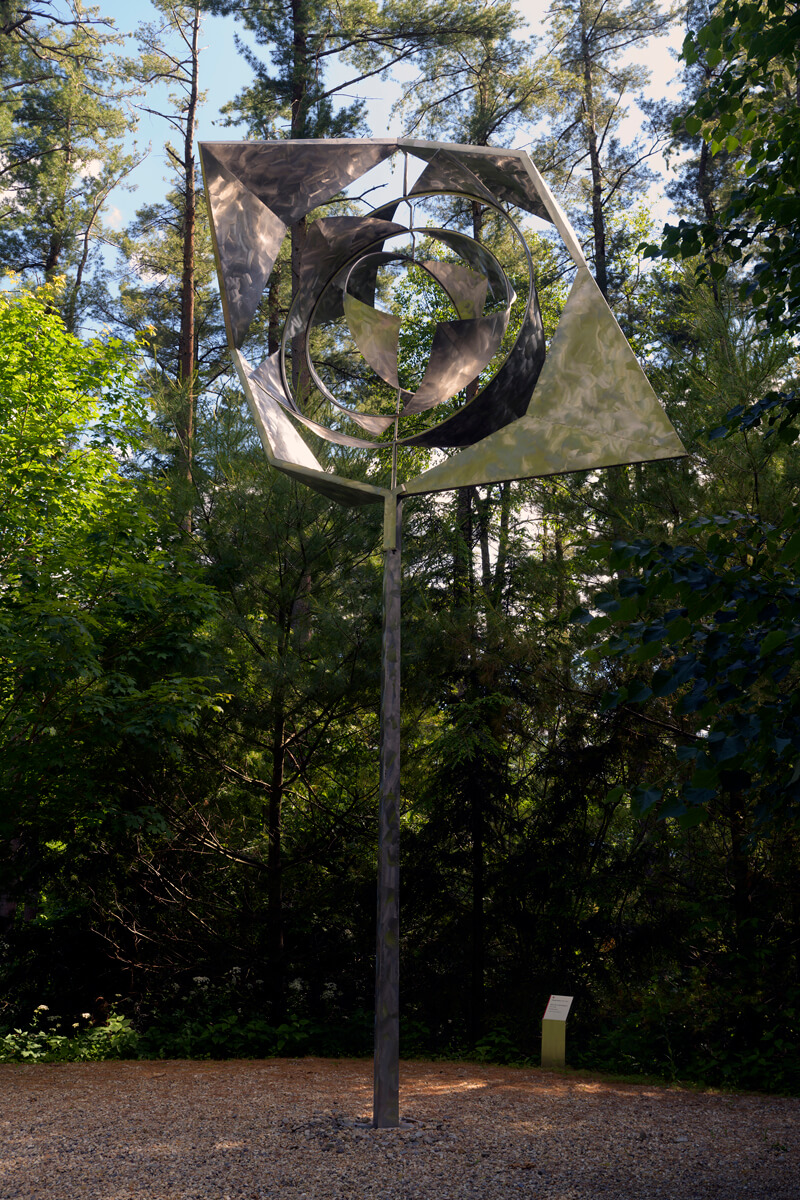 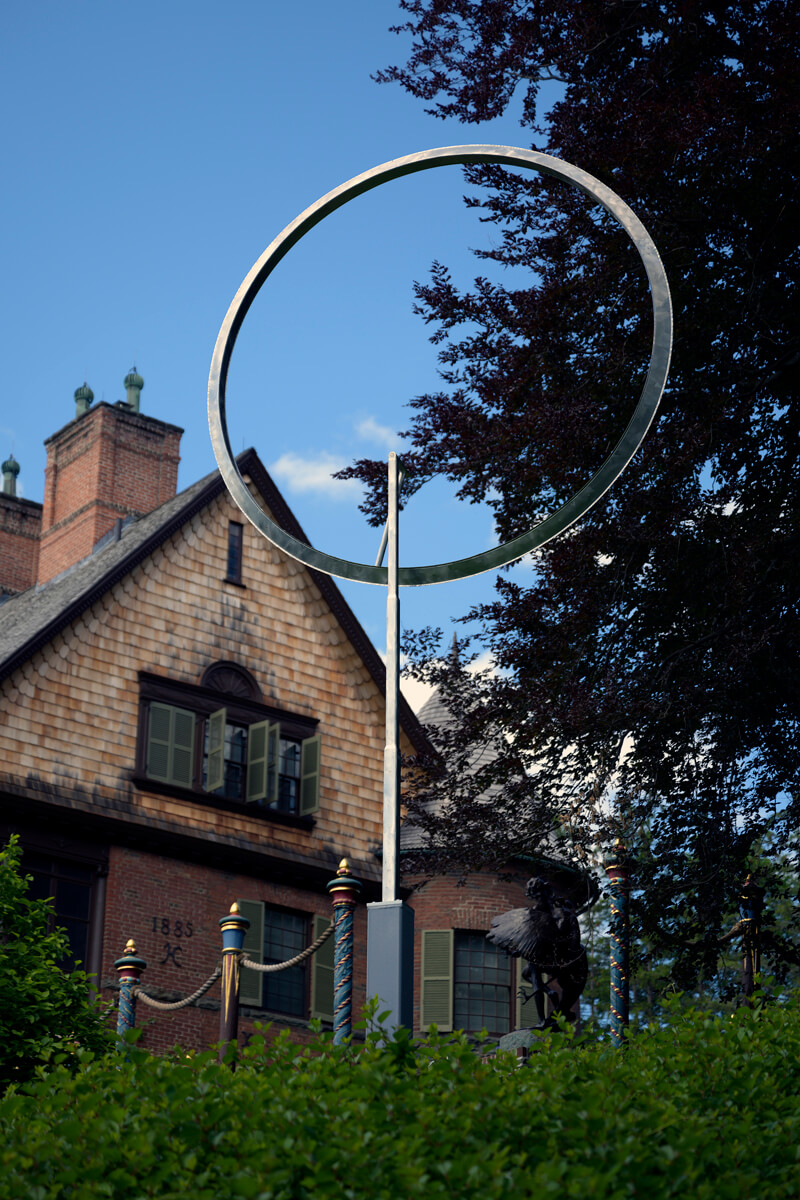 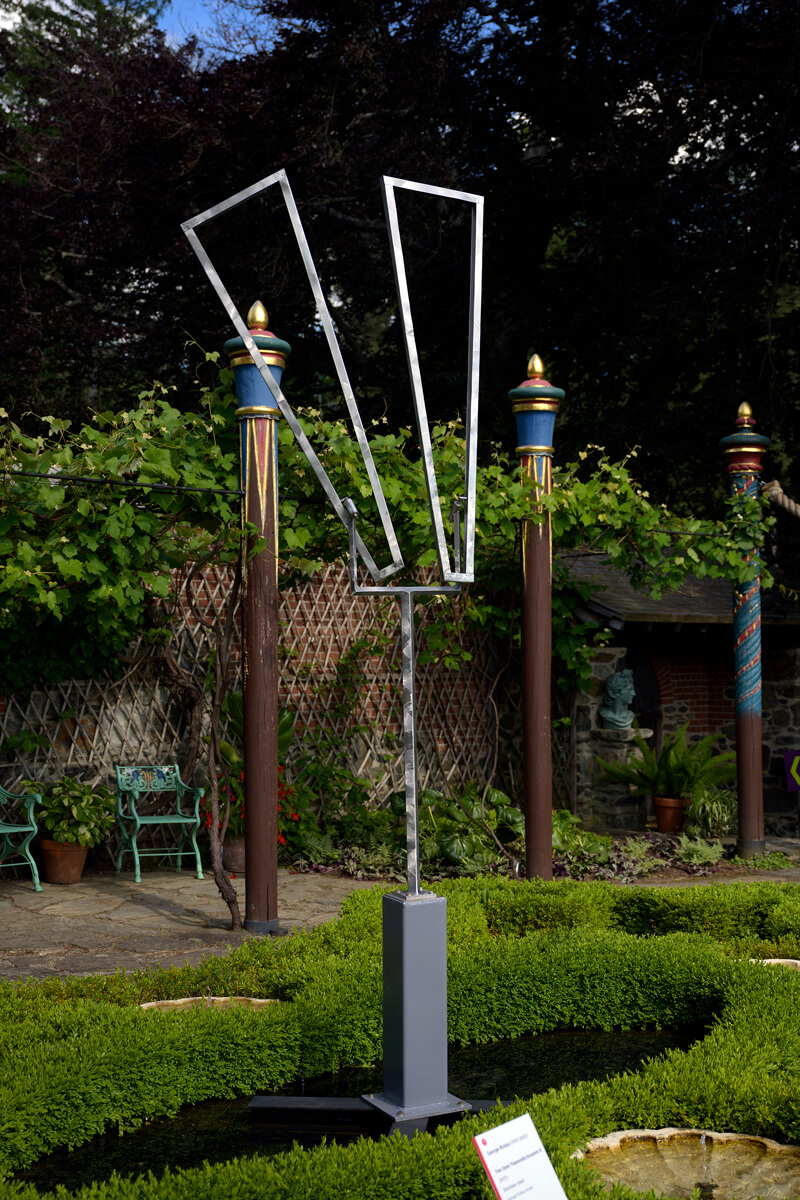 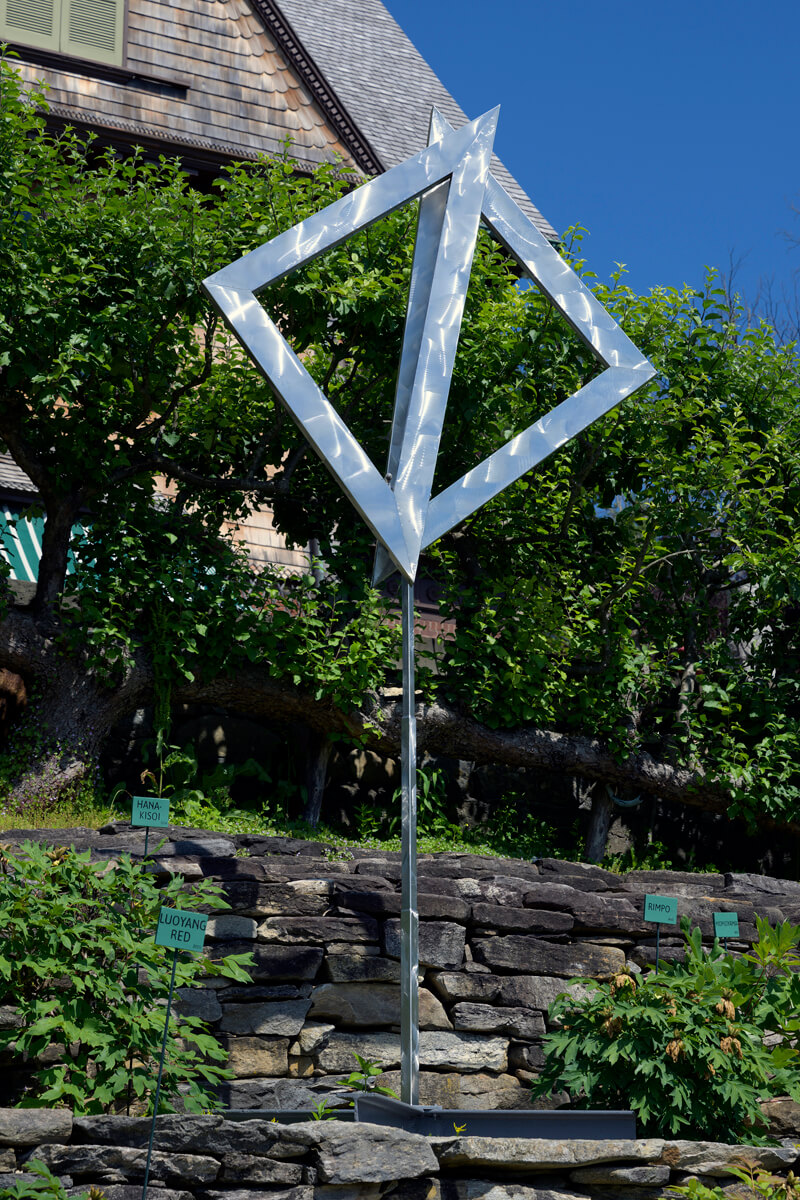 Rickey expanded his compositional repertoire from lines to other geometric shapes, including squares, circles, and triangles.

Rickey often used triangles in his sculptures, manipulating their closed and straight-edged outlines as frames. He balanced the positive space of each stainless steel triangle with the negative space of the area within the triangle. As the triangles move, see how they reframe and reflect the trees, skies, and even the buildings around.

What are some ways this piece seems to be in dialogue with the house? 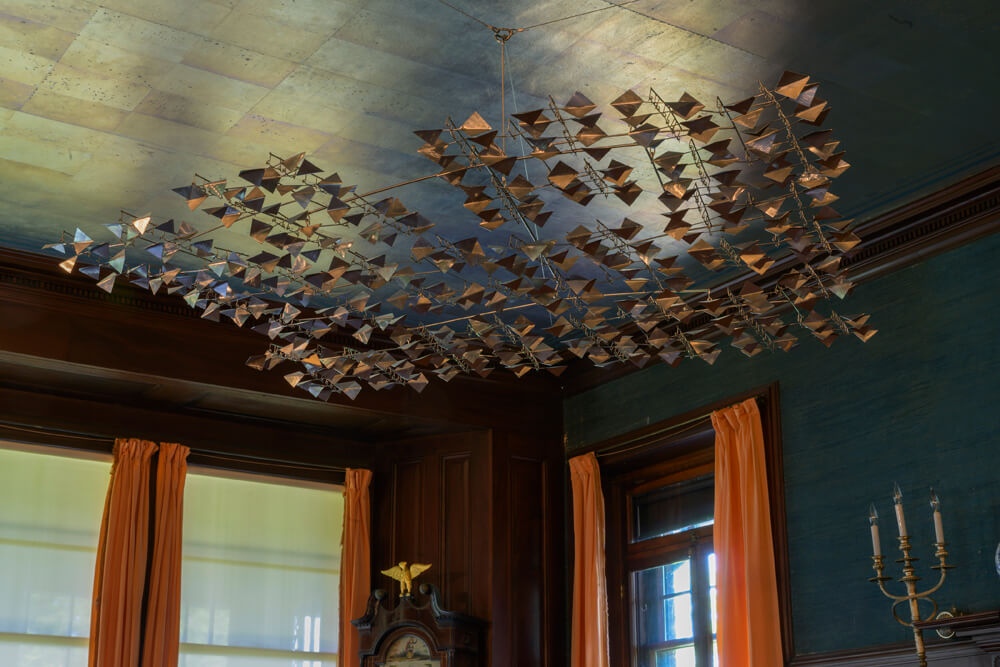 “Nuages” is the French word for clouds, and is a notable direct reference by Rickey to natural phenomena.

The artwork had personal significance for Rickey as it originally hung over the dining room table in his East Chatham, NY, home, much like it is shown here at Naumkeag. The hundreds of small pieces that make up the sculpture sway to even the slightest air current. Although this man-made cloud is meant to be seen inside, it still references nature and natural forces as the source of movement. 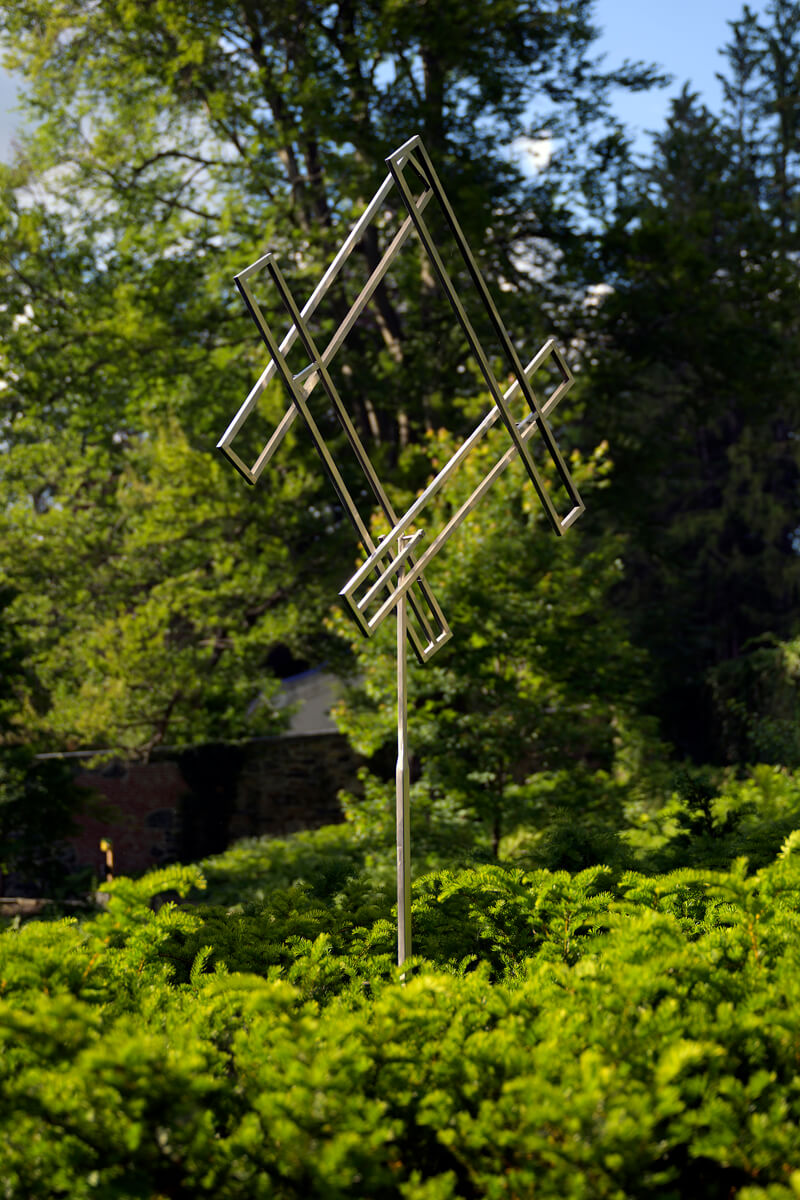 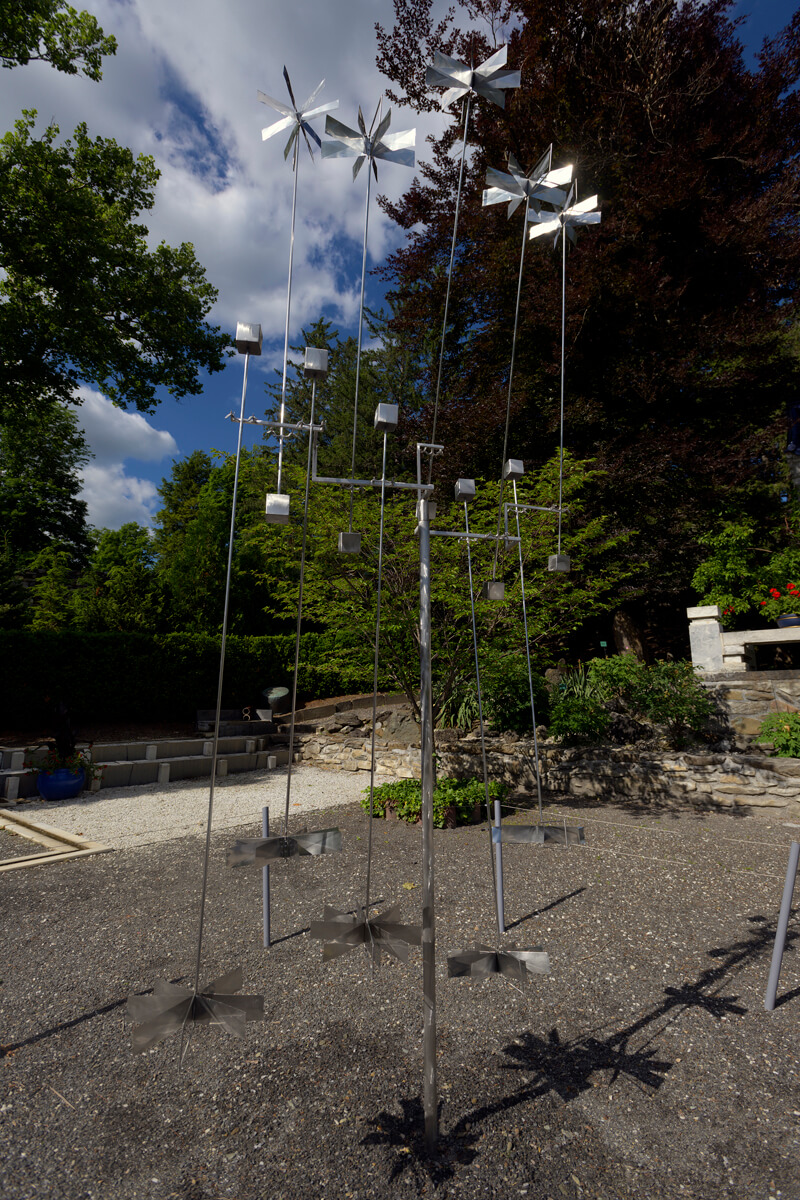 Some of Rickey’s pieces are correlated to their specific setting, such as this especially animated sculpture.

Unlike some other artists who created kinetic sculptures, Rickey never used motors to power movement. This graceful piece is particularly responsive to air currents, so can only be exhibited in a sheltered environment like the walled Chinese Garden. Because each of the ten pairs of rods moves separately and each of the rotors spins individually, the motion resembles a wave. Within the garden environs, the sculpture acts like an abstract water feature. 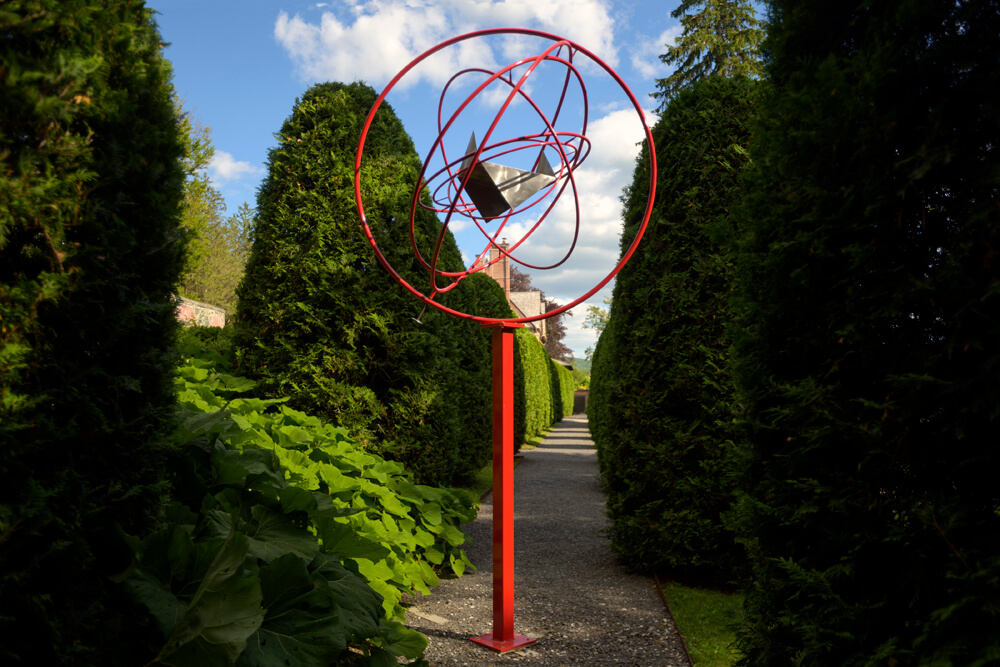 The Space Churn series is one of Rickey’s rare direct references to current events in his body of work.

Rickey began creating Space Churns in the mid-1950s, just as the Cold War space race began heating up. The majority of these distinctive moving orbs were made between the Soviet Union’s launch of Sputnik in 1957 and Neil Armstrong’s first steps on the moon in 1969. In this Space Churn, the atomic shapes and the use of the color red reflect contemporaneous Mid-Century Modern design.

A crank spins the center rings; why do you think Rickey might have given the viewer control of this moveable sculpture? 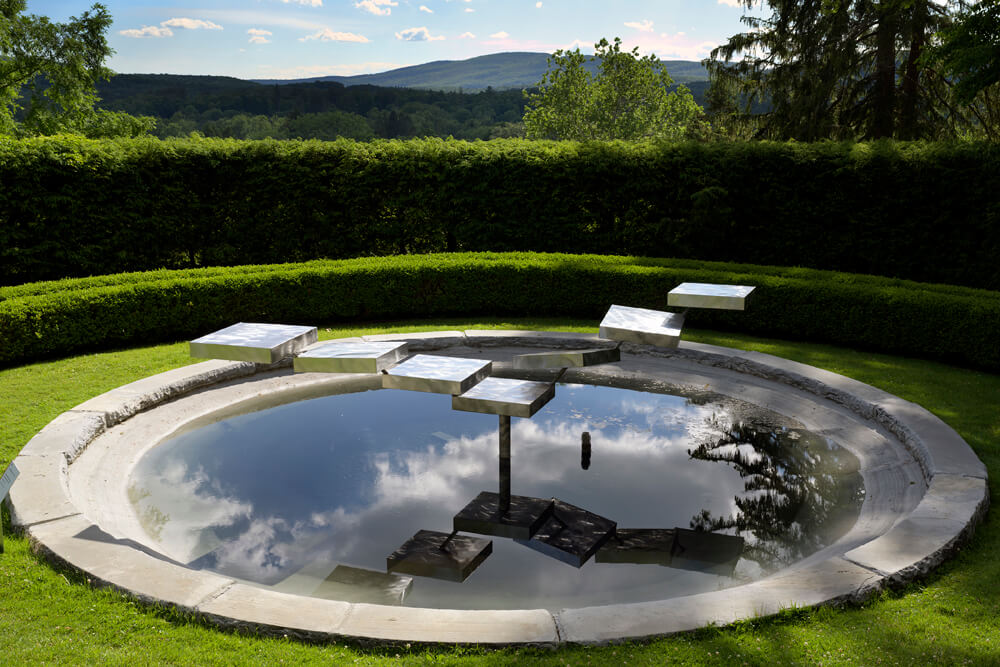 This piece, a larger version of the one displayed in this pond at Naumkeag in 1996, demonstrates how Rickey manipulated movement, time, and language.

The word “column” is most often associated with a vertical band, but in this sculpture, Rickey engineered the squares to rearrange into either a vertical or a horizontal column. Even a gentle breeze can move and transform the elements. Works with evocative titles such as this suggest the inherent impermanence of Rickey’s shifting sculptures and, somewhat paradoxically, the transience and the power of art.